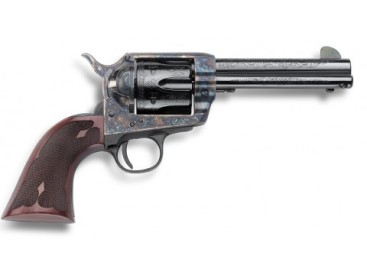 he “Californian” models feature hammer forged steel barrels, which are highly polished and blued. The CNC machined, dropforged frames are colorcasehardened, in Pietta’s signature deep, rich combination of blues, browns, and purples. These frames are an improvement on the traditional casted frames of the Colt single action revolvers. The wider rear and larger front sights offer faster sight acquisition. The combination of traditional esthetics and the best modern technology made the Great Western II “Californian” a popular, durable, and reliable single action on the market for the last 17 years.

The GWII Deluxe “Grande Californian” model elevates the classical beauty of the “Californian” to a completely new level! Elegantly engraved with a combination of Victorian scrollwork and sunbursts on the blued barrel and deep rich colorcasehardened frame, it is accented with a one-piece diamond checkered grip. If you want an engraved SAA on a budget, this is a very atractive package.

So you say you wanna be a BAD Boy?

Over the decades many others have brought similar large frame Single Actions to the market place.  Interarms™ imported the Verginian Dragoon.  Herter’s had a 44 Magnum.  EAA has the Bounty Hunter in 44.  Uberti™ has the Callahan and we cannot forget the Ruger™ New Model Super Blackhawk.

The Bad Boy is constructed of a polished blued steel Pre-War frame with an Army-style grip, but the octagon barrel is a feature that would be expensive if you went to a gunsmith to make one.  Rumor has it that there will be a 6″ version available, but all that is listed for now is the 8″ Barrel.  The adjustable sights make this a great choice for a hunting gun.