Stockmaking… You Can Build Stocks for Guns

Here is a book that will help anybody with the desire and some ability to work with your hands to build gun stocks.  Sherman L. Mays wrote this book to help people with no experience at all to learn the process of making stocks, repairing, finishing and even checkering them.  Naturally, you can’t write a book like this and have it limited to beginners only.  Every gunsmith I have ever met or worked with had a trick or secret to share that made me more profitable and a better craftsman.  Sherman is no exception to that rule, no matter your experience there are good ideas in this book.

Sherman has over forty years invested in making and checkering stocks for his clients.  Along the way he has learned a few tricks and he is not afraid to share his knowledge. The focus of this book is on two piece stocks.  Sherm’s bread and butter is shotgun stocks.  That does not mean a rifle guy can’t learn from this tome.  The subjects of detail work like sling swivels, grip caps and recoil pads are all covered in great detail.

I have never seen this many pictures in a manual, I would argue that more books of how-to information should be this well illustrated.  There are a lot of readers who need pictures to fill in the blanks in their understanding.

Were you can get it:  Amazon or https://4drentals.com/product/stock-work-for-the-beginner

Filed under Books, Gunsmithing, How To, Stocks, tools, Uncategorized

A Couple of Lessons on Chamber Reamers 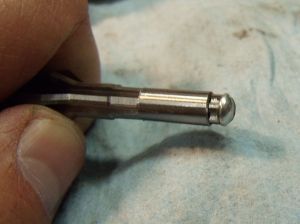 Chamber reamers are pretty complex tools that incorporate all the features of the chamber into one form cutting tool.

At right is pictured the tip of a chamber reamer.  You can see from left to right the shoulder, neck, throat, and pilot.  Note that the pilot appears to be short for the reamer.  It was not short when the pilot bushing was new.

A novice used this tool, the bushing was too tight a fit for the bore.  Proper fit is .0005″ to .001″ under the bore diameter.  That makes for a nice slip fit of the bushing to the bore of the barrel.  The pilot bushing rides on the lands of the barrel.

How do I know the bushing was too tight for the bore?

Simple, the bushing was forced back onto the cutting edge hard enough that the throat actually cut the back of the pilot.  Note in the picture at left, the same busing off the reamer.  You can see where the tool cut the bushing.  This portion of the reamer is not very sharp as it was never intended to cut anything.  So that is how I know this bushing was forced into a tight bore.

The primary reason for using removable pilot bushings is so that you can match the pilot to the bore of your barrel.  No need to force things.

You know this guy has no idea how a reamer works…

The reamer at right was “sharpened” by a “gunsmith”.  The large flat running down the center of the picture has two grinds.  The fat grind closer to the top of the picture us a relief grind, meaning it will never touch the barrel, it is clearance ground to make sure that chips will not get caught behind the cutting edge.

The narrow grind just below the relief grind is where the actual cutting edge is located.  This grind is also relief ground just slightly.  Only the very edge where the grind meets the flute is actually touching the barrel during chambering.  If you stone on the outside grinds of the reamer the dimensions change very quickly because the geometry of the cutting edge and the clearance grind.  Never stone on the outside edge unless you have been trained to do so.

If you look inside the flute on top of the cutting edge where the chips gather during cutting that is the area that you can stone without changing the dimensions of the reamer (in the picture here that would be visible above the grinds we just discussed, of course each flute is one cutting edge).  Again, because of the geometry of the reamer stoning on this inside edge changes dimensions such a tiny amount that it should not create any problems with chamber size if you don’t get carried away.  Normally all that is needed is the cleaning of metal built up on the cutting edge, no real stoning of the reamer itself.

When I look at the picture of the reamer above, I laugh because you can see where the “gunsmith” stoned on the relief grind.  Since this part of the reamer never touches the barrel at anytime it is clear that this guy had no idea how the tool works.  If you don’t know how a tool works, it’s a safe bet you have no business trying to sharpen it.  Send it to the reamer maker if your not sure, its cheaper that an angry customer.

Want to learn more on the subject of headspace, chambering and firearms?  Here are some books that will cut right to the chase.

Filed under Gunsmithing, How To, tools, Uncategorized

What a great too for your shooting box.  Ever been and the range and needed to make a quick repair or adjustment, only to find you don’t have any tools with you.  This is the kind of tool that I would put in my shooting box and just leave there so it will always be handy when I need it at the range.

Caspian Arms all-in-one, stainless steel pocket tool that has all the tools needed to service your 1911 at the range . Stainless steel, fold-open design has a bushing wrench, pliers, and wire cutter. Additional tools in the handles are 3/32″ and 5/32″ Allen wrenches, three screwdriver bits with assist tabs for easy grasp when swinging out of handle, mainspring housing pin punch, file, and an easy-open knife with half-serrated, half-straight blade. Scratch-resistant, matte black hardcoat finish for exceptional durability,with grip panels of rugged G10 fiberglass composite with checkered surface pattern for a firm grasp. Comes with a custom fit nylon belt pouch too.

I’m not big on all-in-one tools but this one really caught my attention, every 1911 owner should have one in his field kit.