The new Savage MSR 10 Competition HD and MSR 15 Competition are flush with features designed to ensure unflinching accuracy when a match is on the line. Both are fitted with an advanced 18-inch carbon fiber wrapped stainless barrel built specifically for the rifle in a collaborative effort between Savage and PROOF Research. And each has a unique ported muzzle brake that allows the shooter to tune recoil impulse to stabilize the muzzle for faster, more accurate follow-up shots. Savage recently unleashed a new the MSR 15 Long Range Rifle chambered in 224 Valkyrie and an MSR 10 Precision chambered in three popular long-range calibers; 6.5 Creedmoor, 6mm Creedmoor and 308 Win.

Last year, CCI extended the range and devastation of magnum rimfire with the VNT bullet design. Now varmint hunters and target shooters can get the same performance and precision in 17 Mach 2 and 22 WMR. The new loads feature a Speer bullet with an extremely thin jacket and polymer tip that team up to offer flat trajectories, superb long-range accuracy and explosive terminal performance on impact.

New Quiet-22 Semi-Auto drastically reduces the volume of standard 22 LR rounds, while cycling flawlessly through semi-automatic rifles and handguns. The accurate, low-velocity loads provide the sensation of shooting through a suppressor—without the suppressor—and are perfect for new shooters.

New Clean-22 uses an exclusive polymer bullet coating to greatly reduce copper and lead fouling in the barrel—without leaving a residue. It also cuts lead buildup in suppressors 60 to 80 percent. Both the Sub-Sonic and High Velocity loads feature a 40-grain round nose lead bullet with geometry that’s been optimized for accuracy. With dependable CCI priming and consistent propellant, Clean-22 provides flawless cycling through semi-automatics and all 22 LR firearms.

The Modern Precision Rifle is now available chambered in .223 Rem. with both 16” and 20” barrel lengths offered.  The .223 Rem. model uses a standard short-action receiver and includes an AICS®-Compatible 10-round polymer magazine. Precision Rifle color options to include a Desert Brown™ anodized chassis.  The new color offers customers an alternative to the standard black hardcoat anodize, while retaining the durability of the anodize finish. 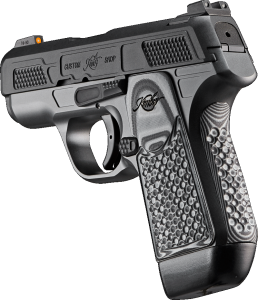 Kimber’s product lineup is the brand new all metal construction striker-fired EVO SP. With four models in this initial release, we believe the EVO SP is the ideal choice for shooters that demand a dependable, feature-packed, compact-size firearm with the benefits of all metal construction for reduced muzzle rise.  Several new revolver models and an updated Micro-Nine are on the list of new offerings for 2019 from Kimber.

Federal Ammunition has a long-Long-LONG list of new offerings for 2019, below are just a few of the interesting loadings coming your way.

HEAVYWEIGHT TSS: Six new 12- and 20-gauge offerings, including blended loads that combine No. 7 and 9 or 8 and 10 Tungsten Super Shot. With some payloads topping 1,000 pellets, they more than double the shot count of lead No. 5 loads of the same weight.

Henry Arms, Long Ranger lever action rifle in 6.5 Creedmoor features a 22” blued steel sporter barrel that is free floated above the forestock to maximize and maintain accuracy even as the barrel gets hot through repeated firing. The buttstock and forestock are figured grain American walnut that is deeply checkered and capped with a solid soft rubber recoil pad on the back and a steel forestock cap on the front. The Long Ranger utilizes a geared action that drives a chromed steel bolt with a 6-lug rotary head into a rear extension of the barrel for a strong and consistent lock-up, similar to that of a bolt action rifle. A 4-round capacity box magazine can be removed and reloaded with a push of the flush-mounted blackened steel magazine release button. There are no external safety features on the Long Ranger, so an in-hammer sliding transfer bar safety guarantees the rifle will not fire unless the hammer is cocked and the trigger is pulled. The manufacturer’s suggested retail price for Henry Long Ranger in 6.5 Creedmoor (Model H014-65).

Watch for More, you know this is not even the tip of the ice burg.