Our friends over a 4D Reamer Rentals LTD have come up with a free app, yes its yours to use with no strings attached, none at all.

This app does what apps do best, provide a simple way to get the information you need and have it handy on your device/phone at all times.  Right now it’s available only for Android.

The GaugeGuide App has now be banned by both Google Play and Amazon App Store.  Down load it just to piss off the anti-gunners…  LOL

Two search methods are provided for the user. Results that are displayed are for cartridges that include the information you entered, so it matters what you type in.  It’s true, many gauges are able to correctly headspace more than one cartridge.  Knowing which ones is valuable information for the gunsmith. From the search results select the result that is closest to your desired caliber, each result will show the gauges that are fully interchangeable with that result.  If you do not see what you are looking for check the other options that appear in the result.  If no result appears, it is likely that your caliber of choice does not interchange with any other caliber, I.E. it has caliber specific gauges.

Many gauges will have “details” (information) available that should be helpful in selecting the correct gauges for your desired use.

With either search method when your receive “Compatible Results” similar to the screen shot below:

The list of Gauges that Interchange is as complete as we have every seen.

Note that the list of “Gauges that Interchange” is a comma separated, continuous list. All calibers listed are interchangeable with the cartridge you searched.

The RENT or BUY buttons are used to place an order for the tools, if you need them.  You will be sent to the 4Drentals.com web site where you can order the tools you need.  The app can be found on Aptoid, Click Here to see the page.

Search as much as you like, its free and informative!  Don’t take someones best guess what gauges you need, use a real data base that will tell you the truth and keep you safe.

Filed under Ackley, Firearms, Gunsmithing, How To, tools, wildcat

Author’s Note:  Read the post at this link first, it supersedes this discussion.

A few years back Nosler decided to bring the 280 Ackley Improved into their list of custom brass and rifles. In order to do this they wanted to take the 280 AI to SAAMI and have it standardized.

Part of the process of standardizing the cartridge was for Nosler to see if other manufacturers had worked with it. They found that Remington had been chambering the 280 in their custom shop. Now here is where the alert comes in. Remington’s Custom Shop chose to shorten the headspace on the venerable design by .014″. When Nosler sent drawings to SAAMI they picked up that number as well.

So by a vote of the members of SAAMI the commercial established specifications for the 280 Ackley were changed from the original design.  The reason reported for this change is that Remington believed it was necessary in order for factory 280 Remington ammunition to be fireformed safely in an Ackley chamber.  Apparently they did not know that Ackley was the single most successful wildcatter of the 20th century.  While he was not the first guy to create and “improved” design, he was the first to standardize the idea and create a safe method of fireforming factory ammo in improved chambers.

Ackley’s method was simple, he simply used a headspace gauge .004″ shorter than the factory case.  This shorter headspace assured that the cartridge would be held tight between the bolt face and the junction of the neck and shoulder of the chamber during fire forming.  Ackley’s method worked fine for more than 50 years before these alterations to his design were made.

Bottom line for anyone who now works with the 280 Ackley Improved you must decide which version of the chamber you will use; the SAAMI or the Ackley; you cannot safely use the Nosler brass in  a traditional Ackley chamber, although it would still be safe to fire form factory ammo in a SAAMI/Nosler chamber. 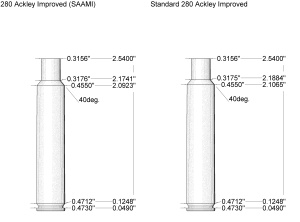 There is a site devoted to P.O. Ackley and his work:

Filed under Ackley, How To, reloading, wildcat

I have long wondered about P.O. Ackley’s claims about bolt thrust.  I have started some tests to see if more modern tools can tell us more about bolt thrust than Ackley was able to learn from his test.  On page 139 of volume 1 of Ackley’s “Handbook for Shooters and Reloaders” he discusses pressure, and I quote, “The usual method of measuring pressure is by means of crusher cylinders, so as to measure the pressure at right angles to the axis of the bore about midway along the body of the chamber.  This method gives a fair idea of the actual chamber pressure exerted upon the walls of the chamber in all directions, but bears little relationship to the amount of this pressure actually transmitted to the bolt or breech block in the form of thrust.”

Ackley believe that minimum body taper reduced bolt thrust.  So, I set out to see if it does or not.  First I set up a 30 caliber barrel in a test fire jig.  I started with a 30-30 WCF chamber, firing factory ammo.  Utilizing the Pressure Trace system I installed a transducer on the barrel to collect pressure data.

We also mounted a transducer over the recessed breech in our barrel to see if we might measure longitudinal stretch.  This did produce measurement, but only time will tell if they have any value.  At this point in the test I suspect that the data we are getting is too flawed to decisively answer any questions.

Its important to lay out some facts at this point.

We learned something right away; while firing the factory ammo in the 30-30 Winchester chamber and collecting pressure/velocity data, I decided to test various degrees of excessive headspace and see the results.  Interestingly, I set the breech with .010″ (10/1000 of an inch) headspace.  The fired cases did not move back at all, the primers did back out the exact .010″ distance.  Ackley did not test this in his series, so right away we learned that the 30-30, which is considered to be a low pressure cartridge will adhere to a dry chamber under pressure, and the brass can contain the factory level pressure without stretching.

All brass was carefully messured, no head expansion or stretching in length occured.  Next we rechambered the barrel to 30-30 Ackely Improved.  The same factory ammo was used to fire-form cases.  The same test was perform with headspace, even during fire-forming the cases did not move back or stretch in length.

We are now at the stage of the test where we are working up loads to see how much velocity we get at the same pressures as our factory ammo.  This is always a hotly debated subject, so it will be interesting to have concrete information to share.

BTW, I am giving you the short version here, the full test and all ballistics will be included in my book on P.O. Ackley.

Updated March 2017, book has been published, “P.O. Ackley, America’s Gunsmith”  The completed  30-30 bolt thrust tests are of course included, along with much more.  You will also find more information about P.O. Ackley at this site: http://www.ackleyimproved.com