Things in the Gunsmithing world are changing.

We spent 8 years with President Obama being the top gun salesman of all time.  He managed to keep the fear level high enough that retail sales firearms grew exponetionally during his Presidency.  Then we had Hillary Clinton running for President during the Lame Duck period of Obama’s time in office.

The result was that tens, probably hundreds of thousands of new shooters, dare I say millions? These new shooters purchased guns out of fear that at some point in the future they would no longer be able to.  After some time many of them discovered how much fun guns are and all the sporting opportunities they provide.  Not to mention, the portion of the market that only cares about personal protection or concealed carry.  All these new shooters then need gunsmiths to help keep their guns running and to update them for specialized use or personal tastes.  That means more people hanging out a shingle as a gunsmith.

Personally, I am thankful for the huge growth in the gunsmithing market.  Competition is healthy for business, it pushes people to offer good service and meet the needs of the market place.

As all this has been happening lots of new people are learning to gunsmith.  Some get formal training from one of the traditional schools or from a distance learning company.  It’s exciting to see the market place grow so dramatically.  It does bring some new challenges that we did not see very often in the past.

New Gunsmiths fresh from school and Hobby Gunsmiths with little or no training have to learn some things the hard way, by trial and error, if there is nobody handy to teach them.  Here are some good resources: Books and DVDs

In this article we are going to talk about one of these items.  In the past I wrote about pilots, discussing solid vs. removable pilots. What we are looking at here is related to that information directly.

Solid pilot reamers are traditionally made with a pilot that’s diameter is at the miniumum expected diameter for barrels made in the U.S.   The idea is simple, by going to minimum spec. the pilots will fit most any barrel you may find.  It’s not unusual for a solid pilot to be a few thoushandths of an inch smaller than the bore (the diameter inside the lands of the barrel is the bore diameter). In short making them as universal as possible.  Some guys will claim they cannot be accurate, that simply proves they have a lack of experience, on the contrary they can be very accurate, producing chambers that win matches.  But that is a seperate subject.

So why do removable pilot reamers exist?

Because some folks like to remove every alibi they can from the process of chambering a barrel.  Removable pilots allow you to utilize a pilot bushing that closely fits the bore of your barrel.  This eliminates unnecessary run-out between the pilot and the bore of the barrel which might allow the chamber to be out of alignment with the bore.

No matter what size or type of pilot you are using, it must slip inside the bore.  A slip fit on a pilot is normally .0005″ to .001″ smaller than the bore.  If the pilot is too large it will not slip in the bore.  There are several bad outcomes possible from a pilot that fits too tightly in the bore.

HINT:  If you think a chamber reamer is dull because it is harder than normal to advance into the barrel blank.  Check the pilot fit.  A tight pilot fit will make the reamer hard to turn and advance, giving the impression it is not sharp.  How do I know this?  Because nearly every time someone complains about a dull reamer I have tested them in a barrel blank in my shop and find that they cut just fine.  In these cases I often see damage to the pilot.  Below is a small gallery of photos showing what happens to pilots when abused. 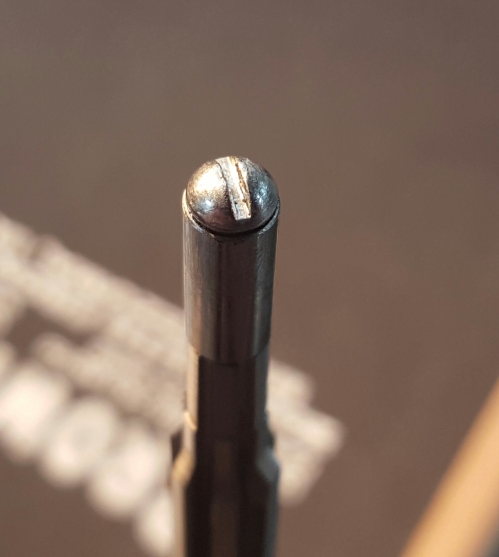 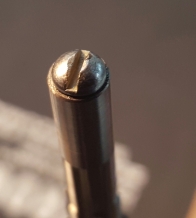 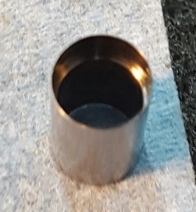 If you push hard enough maybe you can cut the pilot too. 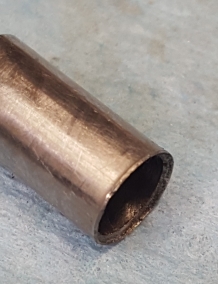 Bushing was forced back onto the reamer. You can see that there was no cutting edge where it met the reamer so it was mashed. Worst of all it expaned making the pilot even bigger in diameter.

Filed under accuracy, Gunsmithing, How To, tools