Hornady Manufacturing® is offering a unique opportunity to bid on a rare Zombie Max™ Ammo Plant in an online auction, with all proceeds benefiting the USA Shooting Team competing in the 2012 Summer Olympic Games in London.

The features of this reloader are identical to the brand new Hornady® Lock-N-Load® Ammo Plant, with one key difference. The Zombie Max™ version has been designed to complement Hornady’s limited-time Zombie Max™ 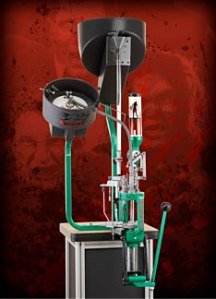 ammunition. Its green paint and “zombified” graphics were crafted by Hornady® Tool Division workers. They created these presses as a surprise for the company’s President and Vice President, Steve and Jason Hornady, as a way to build excitement for the release of the Zombie Max™ line. The Hornadys are offering one for public auction, with all proceeds supporting the USA Shooting team. Details about the tool’s features and technical abilities can be found on the Hornady® website at http://www.hornady.com/store/Lock-N-Load-Ammo-Plant-110-VT.

The online auction is underway at GunBroker.com from April 13 through April 29, 2012. Bidders can also get a first hand look at the Zombie Max™ Ammo Plant in the Hornady® booth #1831 at the NRA Show, April 13-15, 2012, in St. Louis, Missouri. The winning bidder will be notified immediately after the auction closes.