Get Your Rifle Ready for Hunting Season!

After almost thirty years in the gun business I have learned one thing that you can count on from one year to the next; as soon as the 4th of July passes, fall hunting seasons change from next season to “THIS SEASON” overnight.  It’s time to get your guns out and make sure they are ready for this season’s hunts.  First and foremost, you want to repair those little things that broke last year.  At the time you said, “No problem, I have a year to take care of that.”  Bad news… your down to a few weeks now.

The common problems that seem to carry over from one year to the next include scopes that have fogged up, broken parts like safeties, swivels, damaged sights, or stripped screws.  Most of these are simple little fixes that don’t really take that long to fix.  If you’re a do it your self kind of person then it’s time to get out to the garage and make some quick repairs.  If you plan to take this work to a gunsmith you had better head right over to his shop, you see; if he is worth his salt, he is already busy with a few dozen other guys guns.

Minor repairs are not the only things to consider.  Remember last year you swore you would have a better trigger before you took this gun out again?  Or, maybe you planned to have the stock bedded to improve accuracy.  Many shooters discover that the old scope is just too hard to see through in low light, after looking through their buddy’s scope one frosty morning last fall a new scope became a priority.  Even if you’re sticking with an old scope make sure the scope mounts and rings are tight and that none of the screws have broken off.  You would be surprised how many accuracy problems are simply loose scope mounts and rings. 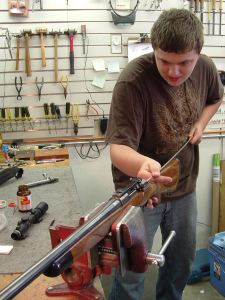 You might be surprised how much better a clean barrel shoots.

One of the simplest things you can do to improve accuracy is to give that rifle a good cleaning.  Pick up the correct cleaning gear for your caliber.  The best cleaning rods are one piece-coated rods; they have no joints that can catch on the barrel during cleaning, potentially damaging the bore.  The coating is designed to allow the rod to slip freely through the barrel without acting as a lap that will cause scratches or undue damage to the bore.  There are many good cleaning solvents, if your rifle is new or has seen little shooting then a solvent to remove carbon and unburned powder will suffice.  If you have an older rifle that used to shoot well but then accuracy “suddenly” fell off, it’s a good idea to try a solvent that is made to remove copper fouling.  Simply follow the directions on the bottle, the maker tells you what method will work best with their product.  If at all possible clean the barrel from the breech to prevent damaging the crown.

A mistake that many shooters make when cleaning a barrel is to think that if a little cleaning is good them MORE will be better.  If solvent is left in the bore too long, some of them have the ability to pit the bore, especially those solvents containing ammonia.  For best results and accuracy, stick to the manufacturers instructions.  When your done cleaning it’s a good idea to wipe the bore down with a patch soaked with oil, like Rem OilÒ, Tri-FloÒ, Break FreeÒ, or one of the other high quality gun oils.  This will protect the bore in storage, be sure to wipe the bore dry with a patch or two before firing as oil in the bore can act like an obstruction and increase chamber pressure.

Once you have all the repairs and upgrades taken care of and the gun is clean its time to sight in.  If your rifle is unchanged from last year, and it was sighted in correctly at that time, then you can go straight to a 100-yard range for sight in.  If you have new sights or a new scope it is easiest and fastest to start the sight in process at 25 yards.  If your gunsmith collimated or “bore sighted” your gun in the shop that only promises to put you on the paper.  By starting close you can fire three shots to be sure where its grouping, then adjust the sights or scope accordingly.  Then fire another three shot group.  Once you’re centered up on the bull it’s time to move out to 100 yards and fire another group.  By starting in close at 25 yards you can save a ton of ammo, it can be hard to make adjustments if your not on the paper, at 25 yards the odds are pretty good that you will be on the paper if the gun has been bore sighted.

If you have a rifle that has a muzzle velocity of  2700 feet per second or more; and that covers most high powered rifles. You can use a rule of 3 when sighting in.  The idea is that the kill zone on a deer or antelope is about 6”.  In the chart below you will see that the “Trajectory Peak in Yards” is the point at which the trajectory of your rifle is 3” above the line of sight and starts back down.  The majority of all game is taken under 100 yards so this system will work for most all shooters.  An old-timer once told me always aim at hair and you will nearly always make a hit.  Check out the “Point Blank Range,” that is the point where your bullet will drop 3” below the line of sight, and you can shoot up to that distance without even considering hold-over, if your sighted in for the indicated zero.  Many shooters simplify this concept by sighting in 3” high at 100 yards.

It’s not unusual to hear clients ask about a new custom rifle for THIS SEASON.  Frankly, by this time of year if a gunsmith says he can build you a nice custom rifle in time for an October 1st season, you should check his references.  By extension, if a gunsmith does not have a backlog you want to know why, before you invest in a custom rifle with him. The majority of rifle builders have a backlog of many months and delivery times of more than a year are common among the best builders.

Much of the reason for long delivery time for custom work is that it is handwork.  It requires the personal attention of an experienced gunsmith; most of them only have two hands.  Then of course there is the perennial problem with days being limited to 24 hours.  Bottom line, if your gunsmith has good references, be patient and you will get top-notch workmanship.

Filed under Firearms, Gunsmithing, How To, hunting, Rifles