The event takes place on April 15 and 16, 2011, at Des Moines Marriott Downtown in Des Moines, Iowa, and is free to gunsmiths and exhibitors.  Prospective employers and gunsmiths will gather to network.  Bring your resume and talk to “big names” in the industry – manufacturers, custom shops, retailers, service centers.

The gathering is not limited to a simple job fair, there will also be valuable seminars that will enhance a gunsmith’s ability to choose a direction and make a good living in the trade.  Seminars range from advancing your career in the gunsmithing profession to starting or expanding a gunsmithing business. Some topics include:

Keynote speaker Ron Power will also address attendees on Responsible, Professional Gunsmith Opportunities. The BATF will be on hand to answer questions.

You can see the full seminar schedule at gunsmithcareerfair.com

Filed under Gunsmithing, How To, tools

In the early 1970’s P.O. Ackley became involved with a company in Salt Lake City known as EMDEKO International.

The company worked a deal with P.O.,  bought out his barrel business and hired Ackley to overseen the production of barrels for EMDEKO.  Under the P.O. Ackley Inc.  name EMDEKO produced over 5000 hunting rifles.  Calibers were mostly 25-06, 270, and 30-06 although others were made.

The details of these rifles are not very inspiring.  They were made on Interarms Mark X actions.  Barrels were Ackley five groove button rifled made in the EMDEKO facility.  None of these guns had iron sights.  Scopes and scope mounts were an optional item.  The wood was good straight grain plain walnut, reportedly from Bishop, in a Monte Carlo style.  Finished with a gloss finish, a plastic grip cap and a recoil pad, and no contrasting forend tip.Quality wise, these are decent hunting rifles much like a standard Interarms Mark X rifle.  The only thing extra they had to offer was the Ackley name and barrel.

Research is vital to the telling of interesting history.  Fred Zeglin has spent almost four years researching this book on P.O. Ackley.  A surprising amount of previously unreported information has come to light, such as the short report you found here.  Ackley’s generation is quickly slipping away, Fred says that many of the people he interviewed at the beginning of his research have since passed away.  The efforts to preserve this important information about America’s most prolific wildcatter came just in time.

The finished book will be the go-to source for information on P.O. Ackley, his work, his cartridges, and his career.  This is the story of a gunsmith who came along at just the right time in history.  He was inquisitive, driven, and creative.  Consequently, his legacy in many ways is the legacy of todays shooter.  You will want to read this book just to see how Ackley lives on in your gun cabinet.  He affected the prod 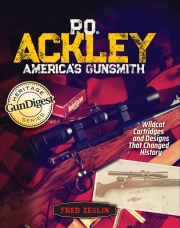 uction of modern cartridges and firearms for many years to come, who else could you say that about?

Below is an Associated Press story about lead in ammunition.  Note that no scientist is going on record in this article and the there is no evidence presented.  Just could be or maybe.

Since the Jackson area is part of the Yellowstone caldera there are large amounts of heavy metals and minerals found in the area.  Isn’t it more likely that the lead found in the blood of animals in the area comes from their diet.  What happened to you are what you eat?  The predators and scavengers of the area feed on the animals of the area and drink the same water.  Why would they not have heavier levels of lead in their blood.

Being higher on the food chain mean predators and scavengers food sources have already concentrated environmental metals and contaminates in their tissue.  So it is easy to see why such predator and scavengers have more lead in their blood.  I hate junk science, and worst of all, tax payers probably paid for these “scientists” to be out there pushing their personal agendas.

This is the second year researchers have tried to gauge the impacts of hunters using lead-free ammunition on the levels of lead found in the blood of big-game scavengers.

Researchers distributed nonlead ammunition to some 100 hunters who had 2010 permits for the National Elk Refuge and Grand Teton National Park.

Biologists then captured ravens and eagles and measured the level of lead in the birds.

Dusty old helmet, rusty old gun,
They sit in the corner and wait –
Two souvenirs of the Second World War
That have withstood the time, and the hate.

Mute witness to a time of much trouble
Where kill or be killed was the law –
Were these implements used with high honor?
What was the glory they saw?

Many times I’ve wanted to ask them –
And now that we’re here all alone,
Relics all three of a long ago war –
Where has freedom gone?

‘Freedom flies in your heart like an eagle.
Let it soar with the winds high above
Among the spirits of soldiers now sleeping,
Guard it with care and with love.’

I salute my old friends in the corner,
I agree with all they have said –
And if the moment of truth comes tomorrow,
I’ll be free, or By God, I’ll be dead!

It just makes me sick to think that the Justice Department signed off on this.  I hope the Senator investigating never lets go.  The memos mentioned in this report are damning enough to indicate there is malfeasance involved here (For those of you at the justice department, that means your actions are criminal).

Too bad a half dozen of this ATF agents co-workers were not lined up behind him to support his story.  At least he is trying to do what’s right.

You never know what you might find inside an old gun.  This license was inside a gun stock I was given as a stock pattern for a shotgun.  It’s my practice to notify the client when I find such things and see if they want it returned to the hiding place or if they want it held out for them.  In this case there is no client but its a cool little piece of history.